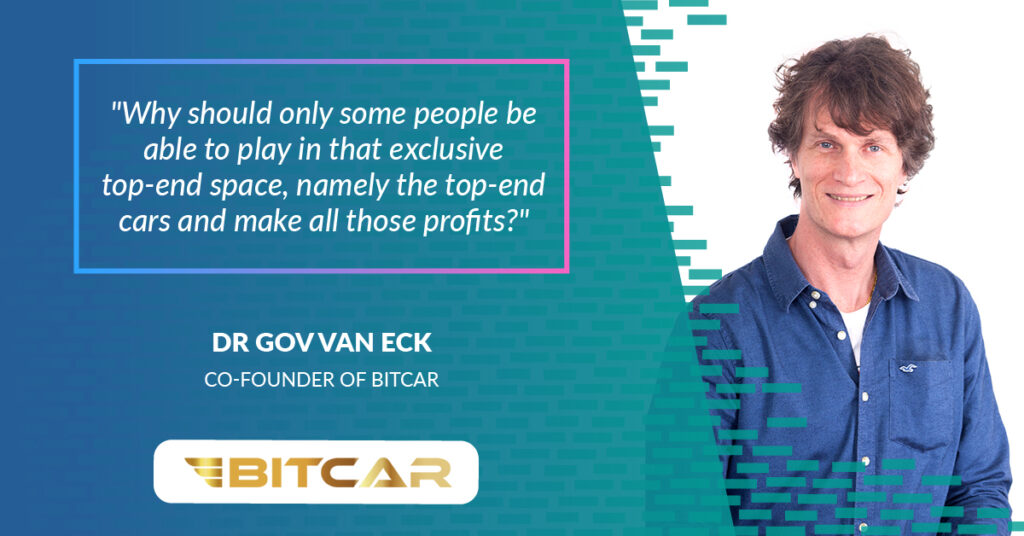 Edward Loades: We’re here at the TechXLR8 conference at the ExCeL Centre in London, we’re joined by Gov van Eck from BitCar . Thanks very much for joining us.

Gov van Eck: Yeah, hi, it’s good to meet you. My name is Gov van Eck and I’m a Co-Founder of BitCar.

What is BitCar? Well, rich people tended to buy top-end exotic cars like Ferrari’s and those kind of cars. And then they bought the whole of those cars and sat on them for a few years and then sold them and when you look at the statistics of that, we found that the top-end cars like the one I mentioned ,the returns and profits that they made outperformed gold, property and stocks over a 10 year period.

So it’s a very interesting investment asset class by itself. And we thought that is disrupt-able. Why should only some people be able to play in that exclusive top-end space, namely the top-end cars and make all those profits? And the amount of money to get in that game is just too high for normal people. So what BitCar does, is its mission is and we launched the platform in May last month already, which is which is great, but BitCar has been working on this idea since 2016.

It carried out an ICO 2017 and raised about 9 million Singapore dollars at a time. And what has transpired as a platform was launched on the Ethereum blockchain, and it’s fully operational as of May 2019. First car that we acquired was a Ferrari 599 GTO. GTO is a very exclusive and limited class of Ferrari itself has only ever been three. And the last one was a 288, GTO before this 599 GTO. Just to give you an example, the 288 GTO went from about £800,000 to £2 million in the space of a couple of years recently. Again, it’s all down to supply and demand for these rare cars.

The 599 GTO that BitCar acquired, and it’s on sale on our platform for about $590,000, there was only 599 ever built of them. And back to that 288 there was 270 of those built. So it’s super exclusive, this 599 GTO that we have on the platform. Now you can go on the platform, and you can buy a minimum of 20 US dollar amounts of that car. And you receive Ethereum tokens representing your interest, which are then tradable by you on a peer-to-peer basis.

Now, again, these cars that BitCar has, it does are not driven the cars, they are merely, you know, displayed from time-to-time. And it’s really a speculative investment type of project is what it is. And so nobody can guarantee the value will go up or down BitCar certainly can’t do that.

It’s really well, just like stocks in the stock market, nobody knows whether that’s going to go up or down either. So similar kind of idea. So in a nutshell, it took us two years plus to develop the platform and get the legal matters sorted out as well. So that we are compliant that law and our lawyers confirm that we could launch platform back in May. And so we did.

Edward Loades: Fantastic. So may I ask are you, first and foremost, a car lover or – it sounds like you have a deep investment in the cars themselves and a great knowledge. And then obviously the technology has come alongside, where do you come in from, from that perspective?

Note From the Editor:

You’ve reached the end of our transcription intro – but your journey doesn’t need to end there. Hit the podcast play button to enjoy the full, uninterrupted interview now.

If you are a B2B Marketing Expert and would like to voice your thoughts on a range of marketing related areas, please feel free to get in touch with us.